‘Mic On Debt Off’ Cambodian Version Is In Production! 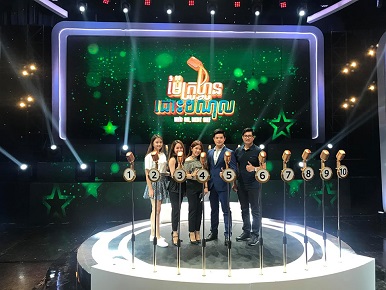 Another adaptation of Workpoint’s singing game show format, “Mic On Debt Off” is on the way.

Bayon Radio and Television, a leading TV channel in Cambodia, has acquired one of Workpoint’s most popular singing competition show formats “Mic On Debt Off” to produce the Cambodian local version for 16 episodes under the name “Microphone Dos Bomnol” or Mic On Debt Off Cambodia.

Mic On Debt Off premiered on Workpoint Channel in August 2016 and has been produced for over 700 episodes.

On Friday, 2nd August 2019, Bayon TV’s production team visited Workpoint studio for consultation session and to watch the shooting of the show.

Apart from the Cambodian version, Mic On Debt off has been produced in Indonesia and Malaysia for over 300 episodes, making it one of the most successful singing game show formats from Workpoint.

You can catch Mic On Debt Off and contestants’ emotional stories Mondays to Fridays at 6:00 pm on Workpoint Channel.